The Farmer's wife 1930s sampler quilt : inspiring letters from farm women of the Great Depression and 99 quilt blocks that honor them 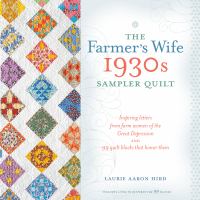