The theft of memory : losing my father, one day at a time 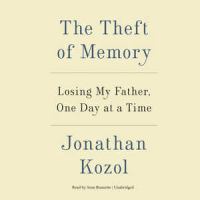 Jonathan Kozol tells the story of his father's life and work as a nationally noted specialist in disorders of the brain and his astonishing ability, at the onset of Alzheimer's disease, to explain the causes of his sickness and then to narrate, step-by-step, his slow descent into dementia. A tender tribute to a father from his son and a richly colored portrait of a devoted doctor who lived more than a century.