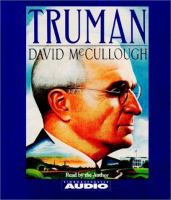 Story of the American President who governed the country during the closing days of World War II, gave the order to drop the atomic bomb on Japan, and witnessed the beginning of the Cold War with the Soviet Union.