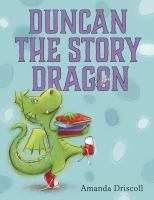 "Duncan the Dragon loves to read--but he keeps accidentally lighting his book on fire. He wants to get to the end of his story, so he tries to find a friend to read to him"--