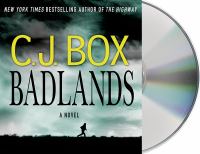 Cassie Dewell is the new deputy sheriff in town and the only female in the department. In this newly rich town where men outnumber women 20-1, the police need all the help they can get. With oil comes money. With money comes drugs. With drugs comes violent gangs wanting to corner the market and infiltrate the cops. When the temperature drops to 30 below and a gang war heats up, Cassie realizes she may be in over her head. She becomes the target of someone who is leaving body parts where she is most likely to find them. As she is propelled on a collision course with a murderous enemy, she finds that the key to it all might come in the most unlikely form.