Orpheus in the underworld : a Toon graphic 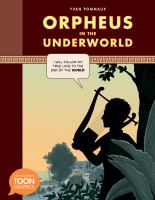 Son of a muse, the young musician Orpheus has everything: talent, beauty, courage, love. Then, in a moment, everything is lost. His bride Eurydice is killed in a terrible accident on their wedding night. Armed only with his lyre, Orpheus enters the desolate Underworld, where no mortal has ever gone before. He's determined to achieve the impossible--bring his wife back to life, restore their happiness, and ensure he's never in danger of losing her again. This gorgeous book retells the tragedy of Orpheus and Eurydice in a way newly relatable to young readers. Through its epic illustrations and captivating, carefully researched text, it earns its place in the canon.