Flight : the Evolution of Aviation 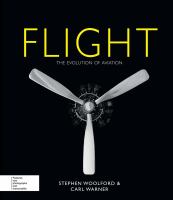 Book
Witness the daring exploits and dangerous challenges that form the story of flight in this beautifully illustrated book, filled with rare photographs and historical documents. From the early hot-air balloons of the Montgolfiers to the complex technology behind military jets and space rockets, this book looks at the innovators that contributed to every leap in development, how flight emerged as a new means of military combat and how it became the leading mode of international travel, all in the space of fewer than 100 years. This book showcases a collection of rare documents including: George Cayley's 1849 design for a glider, the log book kept by Arthur Whitten Brown during the first-ever transatlantic flight, the Apollo II mission report of the moon landing.