Sleeping Handsome and the princess engineer 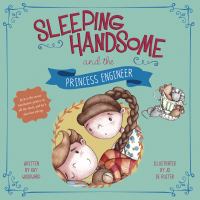 Book
Prince Jack, often called Prince Handsome, grows up under a curse, and when he is pricked by a sword he and the whole castle fall sound asleep-- and as the years pass a city of skyscrapers grow up around the castle making it hard to find, but luckily Princess Anya has an antique map she found on the Internet and her very own tunnel-boring machine.