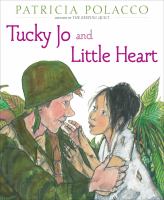 A fifteen-year-old soldier in World War II meets a sweet young girl in the Philippines who helps him remember what he is fighting for as he helps her and others of her village avoid starvation, and many years later she returns his kindness.