The marriage of opposites : a novel 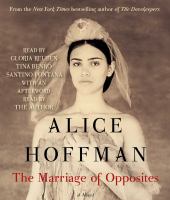 Growing up on idyllic St. Thomas in the early 1800s, Rachel dreams of life in faraway Paris. Rachel's mother, a pillar of their small refugee community of Jews who escaped the Inquisition, has never forgiven her daughter for being a difficult girl who refuses to live by the rules. But Rachel's life is not her own. To save her father's business, she is married off to a widower with three children. When her husband dies suddenly and his handsome, much younger nephew, Frédéric, arrives from France to settle the estate, Rachel seizes her own life story, beginning a defiant, passionate love affair that sparks a scandal that affects all of her family, including her favorite son, Camille Pissarro, who will become one of the greatest artists of France.