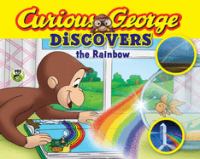 Book
After coming across a story about a leprechaun and his pot of gold at the end of the rainbow, Curious George learns about real rainbows, the colors they reveal, and the weather that causes them.