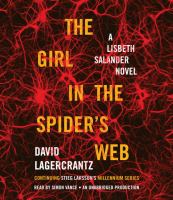 The girl is back. September 2015. See what happens next. In this adrenaline-charged, up-to-the-moment political thriller, Stieg Larsson's Lisbeth Salander and Mikael Blomkvist are back. The troubled genius hacker and crusading journalist thrilled the world in The Girl with the Dragon Tattoo, The Girl Who Played with Fire, and The Girl Who Kicked the Hornet's Nest, which have sold more than 80 million copies worldwide. Author: David Lagercrantz is a Swedish journalist and best-selling author of fiction and nonfiction. He was hand-selected by the Larsson estate to write this stand-alone sequel based on Stieg Larsson's characters.