Michael Jackson's This is it 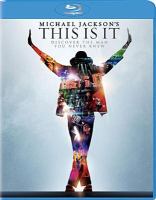 Presents a rare, behind-the-scenes look at Jackson as he developed, created, and rehearsed for his sold-out concerts at London's 02 Arena. Drawn from more than one hundred hours of behind-the-scenes footage, the singer, dancer, filmmaker, architect, creative genius, and great artist at work is captured in raw and candid detail as he created and perfected his planned final London shows.