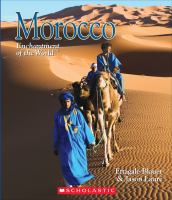 Located along the northwestern edge of Africa, Morocco’s proximity to both Europe and the Middle East has led it to develop a unique culture throughout its history. Readers will explore the nation’s entire history, from its earliest settlement to its time as a site of European colonization to its current status as the only monarchy in North Africa. They will also get a close look at the diverse wildlife of its mountains, deserts, and beaches, and tour its beautiful cities.