Ferrari : all the cars : a complete guide from 1947 to the present 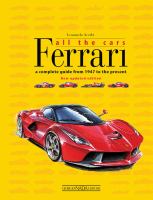 A new edition with updates to spring 2015, FERRARI ALL THE CARS A COMPLETE GUIDE: FROM 1947 TO THE PRESENT includes over 200 designs by illustrator Giorgio Alisi, and covers the history of the Prancing Horse model-by-model, from its origins to the present day, with current production cars.In this 'virtual gallery' the entire production of Ferrari appears in chronological order, sub-divided into grand tourers, sports racers and Formula 1 single-seaters. Each design is supported by a technical specification and text that illustrates the main technical and sporting characteristics. This new, updated edition includes a list of Maranello's cars, enriched by the 458 Italia Speciale and LaFerrari a cars that made their debut in 2013 to be joined by the California T (2014), the car that brought back the turbocharger, just like the F14 T with which Fernando Alonso and Kimi Raikkonen are competing for the Formula 1 World Championship.