When the slave Esperança Garcia wrote a letter 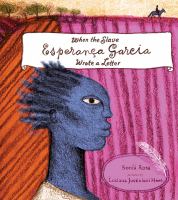 Book
In 1770, the slave Esperança Garcia bravely penned a letter to the governor of Piauí state, in Brazil, describing how she and her children were being mistreated and requesting permission to return to the farm where the rest of her family was living. Before she wrote her letter, Esperança Garcia lived on a cotton farm run by Jesuit priests, where she learned to read and write — a rare opportunity for a woman, especially a slave. But one day she was separated from her husband and older children and taken with her two little ones to be a cook in the home of Captain Antonio Vieira de Couto, where she and the other slaves were beaten. In despair, she wrote to the governor about her terrible situation. She waited each day for a reply, never giving up hope, and although she never received an answer, she is remembered today for being the courageous slave who wrote the first letter of appeal in Afro-Brazilian Brazil. Commemorating the date of the letter’s discovery, September 6th has become Black Consciousness Day in Piauí state. This moving picture book provides a personal look at the tragic history of slavery.