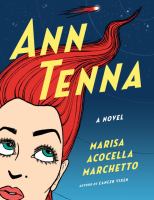 "Glamorous, superconnected Ann Tenna is the founder of Eyemauler, a New York City-based Web site that's always the first to dish the most up-to-the-minute dirt on celebrities and ordinary folks alike. Ann has ascended to the zenith of the New York media scene, attended by groups of grovelers all too willing to be trampled on by her six-inch Giuseppe Zanottis if it means better seats at the table. But as high as her success has taken her, Ann has actually fallen far--very far--from her true self. It takes a near-fatal freak accident on her birthday--April Fool's Day--and an intervention from her cosmic double in a realm beyond our own to make Ann realize the full cost of the humanity she has lost"--