Killing Reagan : the violent assault that changed a presidency 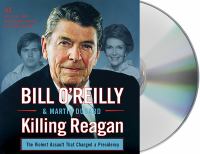 Recounts President Reagan's career, discussing his time in Hollywood, the beginning of his political career, and overcoming the trauma of an assassination attempt.