The hunter's promise : an Abenaki tale 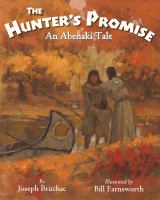 Book
""Promise to remember me!" was all the beautiful woman had ever said to the hunter. She had appeared from nowhere one day, when he had been lonely during the long winter hunting trip. Isolated in the vast wilderness of the northeast, he would only return to his village in the spring. Except that this year he would not be alone, because she had appeared. The hunter had quickly fallen in love with the mysterious woman, and together they had become their own little family. But when spring arrived and it was time to return to the village, she disappeared just as suddenly as she had arrived. Would he ever see his love again? The hunter didn’t know, but he was sure he would keep his promise and never forget her. That is, until one day the chief’s daughter cast a spell on him! World-renowned storyteller Joseph Bruchac retells this traditional story of love, loyalty, trust, and magic, which can be found in various forms among many of the indigenous nations of the northeast, both Iroquoian and Algonquin. Join him and award-winning illustrator Bill Farnsworth, as they recount this ancient and unique Abenaki tale of keeping a promise to one’s family and of the proper relationship of humans to the natural world"--Amazon.com.