Jackrabbit McCabe and the electric telegraph 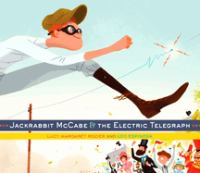 Book
Jackrabbit McCabe's unusually long legs have made him the fastest thing around, and he uses his speed for everything from racing against horses to fetching the doctor, but when the electric telegraph arrives in Windy Flats, Jackrabbit may have met his match.