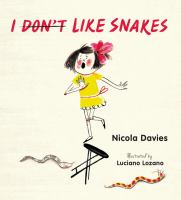 A young girl learns facts about snakes, including their behavior, physical characteristics, and eating habits, to overcome her trepidation.