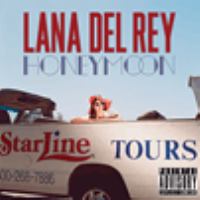 The fourth album from Lana Del Rey takes on a more orchestral approach than her previous albums. Fans have already had a taste with the singles Honeymoon and High By the Beach.