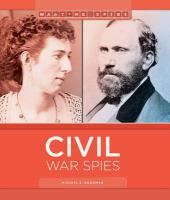 Book
"A historical account of espionage during the American Civil War, including famous spies such as Elizabeth Van Lew, covert missions, and technologies that influenced the course of the conflict"--