The problem with not being scared of kids 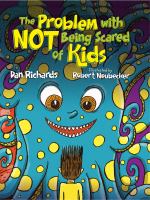 A group of monsters want to make friends with kids, but the kids are afraid of them despite the monsters efforts to play, do crafts, and share with them.