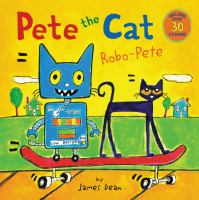 Book
When Pete's friends don't want to play the same games asa he does, Pete decides to build a robot that will do whatever he tells it to do..