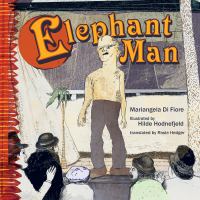 Book
Every night people swarm to a theater in London to see the Elephant Man, whose real name is Joseph Merrick. They scream in terror at the sight of him. But beneath Joseph's shocking exterior, he longs for affection and understanding. Disfigured in childhood by a rare disease, Joseph is rejected by his family, bullied in the streets, and ridiculed at his job. While touring Europe with a freak show, he's robbed and abandoned. Joseph seems to encounter misfortune at every turn, but eventually finds friendship with a kind doctor in England. Though he died young, Joseph became world famous and inspired many with his gentleness and dignity. Masterful illustrations and archival photographs are joined with simple but moving language, bringing the celebrated true story of the Elephant Man to life. Joseph Merrick (1862-1890) is believed to have suffered from a combination of the diseases neurofribomatosis type 1 and Proteus syndrome. This is a tremendously affecting book about being different, refusing to be a victim, and finding happiness in even the most challenging of circumstances.