Life in the war. 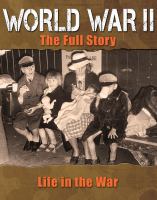 Book
"For combatants and civilians alike, the war affected everybody. This book describes what life was like for individuals both on the front line and at home, how they received information from their governments about the war, and how the impact of the conflict was felt around the whole world." --