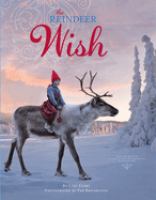 Book
After Anja discovers an abandoned reindeer baby in the woods, she raises him, but as the reindeer grows he wishes to rejoin his own kind and Anja leads him to join the greatest reindeer of all, those of Santa's sleigh team.