All the stars in the heavens : [a novel] 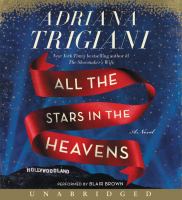 The movie business is booming in 1935 when twenty-one-year-old Loretta Young meets thirty-four-year-old Clark Gable on the set of The Call of the Wild. Though he's already married, Gable falls for the stunning and vivacious young actress instantly. Far from the glittering lights of Hollywood, Sister Alda Ducci has been forced to leave her convent and begin a new journey that leads her to Loretta. Becoming Miss Young's secretary, the innocent and pious young Alda must navigate the wild terrain of Hollywood with fierce determination and a moral code that derives from her Italian roots. Over the course of decades, she and Loretta encounter scandal and adventure, choose love and passion, and forge an enduring bond of love and loyalty that will be put to the test when they eventually face the greatest obstacle of their lives.