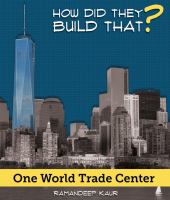 Book
At 1,792 feet tall, New York City's One World Trade Center is the tallest building in America. It has more than 100 floors, a grand lobby, world-class restaurants, and lots of office space for workers. The building is also open to visitors, who can ride the elevator all the way to the top and view New York from above. Built in memory of the fallen Americans of 9/11, One World Trade Center is an important landmark for the United States. Read more to learn how it was built and what its uses are.