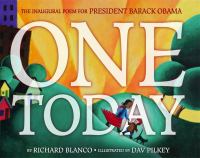 Book
A lush and lyrical, patriotic commemoration of America from dawn to dusk and from coast to coast written to commemorate President Barack Obama's second presidential inauguration.