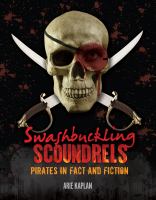 Book
"You might be a fan of Jack Sparrow in the Pirates of the Caribbean movies. But did you know that real-life pirates were even more daring and charismatic? For example, Edward Teach, better known as Blackbeard, reportedly kept a lit fuse under his hat, creating a frightening haze of smoke around his head. William Fly, convicted of piracy in 1726, had to show his executioner how to tie the noose that went around his neck at the gallows. Pirates are outlaws who commit crimes at sea. Throughout history they have attacked cargo-laden ships to pillage gold, silver, human slaves, and valuable foodstuffs. Twenty-first-century pirates take crews hostage and demand ransoms. Some even siphon off petroleum from tanker ships. The world of pirates is one of violence and economic desperation. Yet over the centuries, pirates have acquired a reputation as rugged adventurers and heroes. Novelists, playwrights, cartoonists, and screenwriters have created a wide range of tales showing pirates as noble and even lovable figures. Swashbuckling Scoundrels introduces readers to real-life pirates medieval Viking raiders, Caribbean buccaneers, black pirates, female pirates, and modern-day pirates as well as famous fictional characters such as Long John Silver and Mary "Jacky" Faber of the Bloody Jack series of novels. See how historical and fictional pirates compare and why we thrill to tales of daring outlaw pirates.".