The bazaar of bad dreams : stories 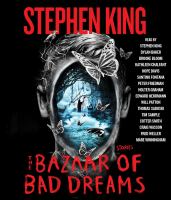 Since his first collection "Nightshift" published thirty-five years ago, Stephen King has dazzled readers with his genius as a writer of short fiction. In this new collection he assembles, for the first time, recent stories that have never been published in a book. He introduces each with a passage about its origins or his motivations for writing it. Magnificent, eerie, utterly compelling, these stories comprise one of King's finest gifts to his constant reader, "I made them especially for you," says King.