I am Henry Finch 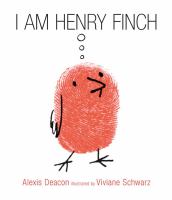 Living on a big block where the other finches make such a racket that nobody can hear themselves think, a little bird with big ambitions sees an opportunity for greatness that has unexpected consequences.