Royals, rebels, and horrible headchoppers : a bloodthirsty history of the terrifying Tudors! 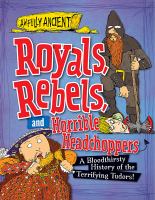 Book
While living in Tudor England wasn't a picnic for many people, the unluckiest were at the top of the social ladder--queens. Henry VIII was one of the Tudor kings and he famously divorced and killed many of his queens in his quest for a male heir. That's not all that happened during the Tudors' reign! Readers learn about the place of rebellions, the plague, and even the use of leeches in the history of England. A colorful layout, playful tone, and relatable content keep readers engaged with a distinctive historic era.