The Golem of Paris 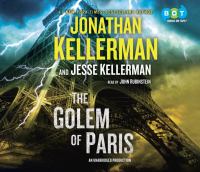 It's been more than a year since LAPD detective Jacob Lev learned the remarkable truth about his family, and he's not coping well. And while Jacob has tried to build a bridge to his mother, she remains a stranger to him, imprisoned inside her own tattered mind. Then he comes across the file for a gruesome unsolved murder that brings the two halves of his life into startling collision.