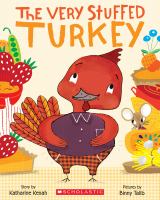 When he is invited to five Thanksgiving dinners, Turkey accepts all of his friends invitations, but wonders if he has room in his stomach for all that food.