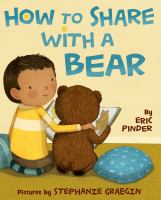 One cold day, Thomas builds a cave of pillows and blankets where he can read, but when he goes to get a flashlight, a young "bear" goes inside and nothing Thomas does discourages the bear from being near him.