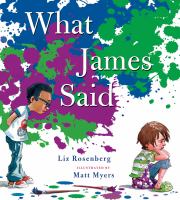 A little girl ignores her best friend James after she hears rumors that he has been talking about her, but soon realizes that she misses his friendship.