'Twas the night before Christmas 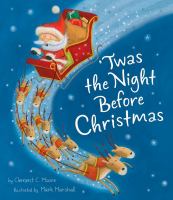 Book
PICTURE STORYBOOKS. 'Twas the night before Christmas, when all through the house, not a creature was stirring, not even a mouse. It's Christmas Eve, and the entire house is sleeping -- except one boy, woken by the clatter of hooves on the roof. As he tiptoes downstairs, who will he find?. Ages 0+.