Inside Biosphere 2 : earth science under glass 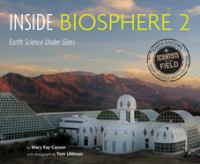 Book
"In the 1990s, scientists lived inside Biosphere 2 (Biosphere 1 is the Earth itself) for two years, trying to figure out if colonizing Mars would ever be possible. Now scientists don't live there but instead conduct all sorts of studies and experiments aimed to help us better understand our environment and especially understand what sort of things are happening to it due to climate change and other man-made problems. It's a unique take on the Scientists in the Field mission statement - in this case, the field / lab is a replica that allows the scientists to conduct large scale experiments that would otherwise be impossible." -- Provided by publisher.