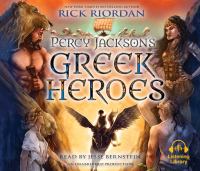 Available as a download from OWWL2go with a valid OWWL borrower card.
Modern-day demigod Percy Jackson tells the origin stories of major Greek heroes, including Perseus, Bellerophon, and Atalanta, while offering his own personal take on his ancient associates.