The book of speculation: a novel 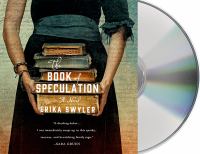 Simon Watson, a young librarian on the verge of losing his job, lives alone on the Long Island Sound in his family home--a house, perched on the edge of a bluff, that is slowly crumbling toward the sea. His parents are long dead, his mother having drowned in the water his house overlooks. His younger sister, Enola, works for a traveling carnival reading tarot cards, and seldom calls. On a day in late June, Simon receives a mysterious package from an antiquarian bookseller. The book tells the story of Amos and Evangeline, doomed lovers who lived and worked in a traveling circus more than two hundred years ago. The paper crackles with age as Simon turns the yellowed pages filled with notes, sketches, and whimsical flourishes; and his best friend and fellow librarian, Alice, looks on in increasing alarm. Why does his grandmother's name, Verona Bonn, appear in this book? Why do so many women in his family drown on July 24? Could there possibly be some kind of curse on his family--and could Enola, who has suddenly turned up at home for the first time in six years, risk the same fate in just a few weeks? In order to save her--and perhaps himself--Simon must try urgently to decode his family history while moving on from the past.