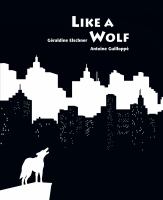 "He has pointy ears and sharp teeth. He's not small and cute like the other dogs. When people see him, all they think is, "Just like a wolf!" Raised in harsh circumstances and languishing in a dim kennel, this is a lonely dog whose only wish is for freedom and friendship. Who will be the one to give him a chance, to see beyond his wildness to the good dog underneath?"--Page [2] of cover.