What kind of creatures are we? 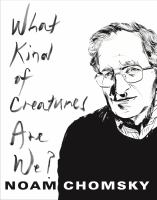 Book
Noam Chomsky is widely known and deeply admired for being the founder of modern linguistics, one of the founders of the field of cognitive science, and perhaps the most avidly read political theorist and commentator of our time. In these lectures, he presents a lifetime of philosophical reflection on all three of these areas of research to which he has contributed for over half a century. In clear, precise, and non-technical language, Chomsky elaborates on fifty years of scientific development in the study of language, sketching how his own work has implications for the origins of language, the close relations that language bears to thought, and its eventual biological basis.