The annotated Alice : Alice's adventures in Wonderland & Through the looking-glass 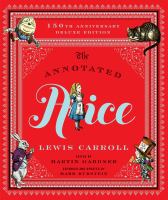 "Celebrating the 150th anniversary of Alice's Adventures in Wonderland comes this richly illustrated and expanded collector's edition of Martin Gardner's The Annotated Alice. First appearing in 1960, The Annotated Alice became an instant classic by, among other things, decoding the wordplay and mathematical riddles embedded within Lewis Carroll's masterpiece. As a result, Martin Gardner's groundbreaking work went on to sell over a million copies, establishing the modest math genius as one of our foremost Carroll scholars. Now, on the sesquicentennial of Alice's 1865 publication, comes this deluxe edition that combines all Gardner's annotations with updates from his Knight Letter columns and correspondence with leading Carrollian experts. This gorgeous edition also includes over 100 new color and black-and-white illustrations, including images by Salvador Dalí and Barry Moser, which complement the original John Tenniel art. With close cooperation from the Lewis Carroll Society of North America and an introduction by its president emeritus, Mark Burstein, this authorized edition perfectly celebrates the legacy of both Martin Gardner and Lewis Carroll" --