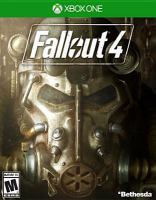 Play to rebuild your world and determine your fate as the only survivor of Vault 111 in a world destroyed by nuclear war.