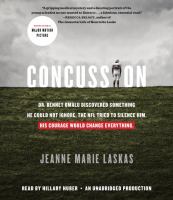 In September of 2002, in a dingy morgue in downtown Pittsburgh, a young forensic neuropathologist named Bennet Omalu picked up a scalpel and made a discovery that would rattle America in ways he never intended. Omalu was new to America, chasing the dream, a deeply spiritual man escaping the wounds of civil war in Nigeria. The body on the slab in front of him belonged to a fifty-year-old named Mike Webster - aka 'Iron Mike' - a Hall of Fame center for the Pittsburgh Steelers. The search for answers would change Omalu's life forever and put him in the crosshairs of one of the most powerful corporations in America: the National Football League.