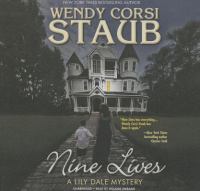 After the death of her husband, Bella Jordan and her son need a fresh start. But on their way to stay with family in Chicago, they stop in Lily Dale, New York, and a storm forces them to spend the night.Brimming with kooky psychics and mediums, Lily Dale is just the kind of quirky little town Bella's late husband always talked about settling down in. So when the local hotelier, Leona, passes away, Bella agrees to step in and help temporarily. The longer she and Max stay there, the more Lily Dale starts to feel like home.But for Bella, finding a home means finding danger too. Leona was murdered, and it's up to Bella to track down the killer before her sanctuary comes crashing down in Staub's warm and witty new series debut.