What doesn't kill her : a novel 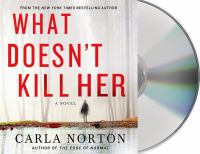 A riveting new thriller in which the heroine must confront her former tormentor who has escaped from a hospital for the criminally insane.